Air pollution in the UK results in 24,000 premature deaths every year and costs the NHS an estimated £20 billion annually. The short-term effects of air pollution include cardiovascular and respiratory illnesses which result in added stress to the heart and lungs. These effects can compound over time and lead to long term conditions such as a loss of lung capacity leading to a decreased lung function as well as the development of diseases such as asthma, all leading to a shortened life span. People with existing heart conditions and lung diseases are more susceptible to the severe health impacts of air pollution.

Zoe Tidman from The Independent recently covered Yorkshire hitting its worst levels of air pollution and the Government has just announced a £11.6m fund for local authorities to deliver projects to improve air quality as well as launching two consultations on proposals to make it easier for local authorities to tackle poor air quality in their areas.  As a leading innovator in Internet of Things (IoT) and Smart cities, Connexin has already been helping businesses and cities accelerate their efforts with these solutions by deploying a network of air-quality sensors. These sensors record the concentration of regulated pollutants such as Carbon Dioxide, Carbon Monoxide as well as other key variables such as ambient temperature and relative humidity. Once the data has been uploaded to the cloud, it is automatically processed through ConnexinOS, a platform that enables the analysis and visualisation of large datasets on a visual dashboard.

City councils can use these insights from the ConnexinOS dashboard to identify the most polluted areas and use contextual data to better understand what factors have led to that increased air pollution. This allows them to take appropriate action and put measures in place that can lower the air pollution in these areas. For example, significantly high concentrations of carbon monoxide and nitrogen oxides in a city centre are often the result of road traffic. Councils can choose to introduce ULEZ zones in these city centres, to discourage driving and promote more environmentally friendly public modes of transportation. This air quality data can also be overlayed with footfall data through the city centres. This allows the councils to visualise the foot traffic flows through town and combined with the air quality data, it can help them better understand where reducing air pollution will have the greatest impact on the local public.

The collection of granular air quality data combined with the power of a visualisation platform has allowed councils to gain meaningful insights which are then used to drive initiatives that improve the quality of living for the general public. More importantly, it allows the councils to quantify the impact of new clean air initiatives by comparing it to the baseline data sets.

Want to understand more about the air quality in your city or place? Or how the Internet of Things can help you tackle air pollution, reach out to us using the form below. 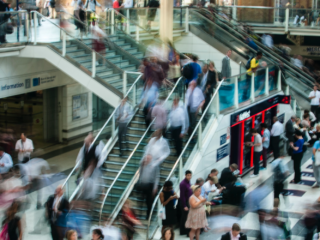